"All The Dark We Will Not See" - Is it Okay to Search For a New Publisher? 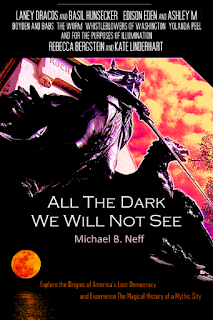 ALL THE DARK WE WILL NOT SEE, published by the distinguished Serving House Books, first appeared as "Year of The Rhinoceros," published by a popular and respected literary press in LA known as Red Hen Press. The initial birth of this story, fallen to earth as a big cracked egg, never possessed the proper edits or even a suitable cover. Not only that, but the lamination peeled easily, type was smudged in quarter-sized spots throughout the book, and the presence of it was generally rendered odd by "burn victim" artwork I was forced to swallow in order to prevent an even worse cover from potentially manifesting itself. But my intention here isn't to bitch about the staff of chickens at Red Hen, it's to make sense out of the emergence of a new edition of the novel now entitled ALL THE DARK WE WILL NOT SEE.

As time passed, I became more and more determined to get my rights back and land a new publisher, and I was eventually successful. The new edition now possesses everything I wanted for the first, and more, including an author preface, new cover, substantive edits, and text sans scores of typographical errors.

I have to confess that I'm lucky. Most authors don't get a chance to do it over, but I did. My new press, Serving House Books, is both brilliant and led by a fantastic editor, Walt Cummins. I can't thank or praise the press enough. I am surrounded by great writers, poets and authors, and in a company I respect.

So what's the bottom line here? I encourage all serious writers to strongly consider quality independent presses like Serving House. The literary history of the world is written by presses such as these, and by presses like Algonquin Books and Copper Canyon, among many others.

Larger publishing houses in New York have their place (especially when it comes to big genre books), and their advantages, but the quality independents will more likely treat you with respect and make a home for you in a way that many overworked, underpaid New York publishing house staff cannot even imagine much less engineer (usually through no fault of their own).

By Michael Neff
OUTSIDE OF NARCISSISM, IMPATIENCE AND BAD ADVICE ARE A WRITER'S WORST ENEMIES . If you ever attend writer events, you will never cease to hear utterances of bad writing advice, the popular kind that circulate like  ruinous viral memes through the nervous systems of America's aborning novel writers. And each time you are exposed, you either chuckle or swear, depending on your mood and the circumstance. You might make a daring attempt to kill the meme in its tracks before it can infect someone else, or you might just stare at the writer with a dumbfounded look and ask, "Where the hell did you hear that?" Yes, the primal question: WHERE THE HELL DID YOU HEAR THAT? Inevitably, many will point to their writer's group . Ahhhh, of course , you think. Why just recently at an Algonkian event , one of my faculty (a former senior editor at Random House) and I were faced with an individual who adamantly asserted to us both that using only one point of view to write a n
23 comments
Read more

By Michael Neff
At a conservative estimate, upwards of 250,000 writers in the U.S. are currently struggling to write or find an agent for their first commercial novel or memoir. If you understand this business, you also know why an enormous percentage are unable to make it happen. Below are my top seven reasons why otherwise passionate writers will join the 99.9% never to become commercially published (btw, to read other valid perspectives on this, click on the " novel rejection reasons " label on the right). 1. NEOPHYTE SKILL SET AND A FAILURE TO COMPREHEND THE PROBLEM   In the case of the writer's prose narrative, it just does not display the kind of energy, cinema, creativity, and polish necessary to convince a gatekeeper professional to go deeper. The first line falls with a thud, and the graph dips from there into a pond of blah. This circumstance is perhaps the number one cause of quick rejection. Usually, the writer in question is sufficiently new to the game, not aware,
4 comments
Read more