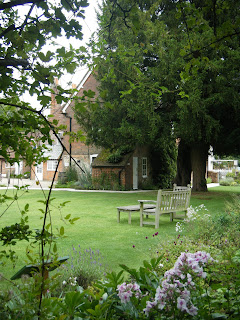 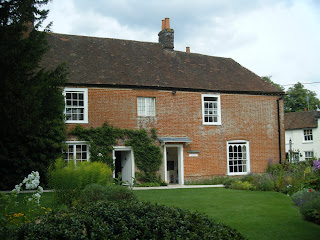 
Pardon me while a get a bit gooey about writing for a moment. I've just returned from a trip to England where I went on a (sort of) Jane Austen pilgrimage. If you call visiting her writing desk at the British Library, her portrait at the National Portrait Gallery, her grave at Winchester Cathedral, the house where she died around the corner from the Cathedral, and her home at Chawton Cottage (that's it there) a pilgrimage. Okay, okay. Guilty.

I did also visit the Churchill War Rooms does that balance it out?

I'm still happy that I went and I encourage you to go on a pilgrimage to visit sites related to a writer you admire, or sites from a novel you love. It can be rather inspiring. I had a terrific novel idea while traveling and, though not related to Austen or the Regency period, I give her credit for the thought.

There's another tip - if you can find a writing workshop wherever you're going, take it! How cool was it to sit in her garden doing writing exercises?

It's harder to write a sympathetic female lead character than a male one, I think. Sorry if that sounds like a double standard, but in my experience as a reader and writer, it's true. Most have certain expectations of female characters related to emotions, actions, desires. Whether you meet these expectations or subvert them and how you do so, will affect whether or not your readers (especially women, who often identify with the female character) like them or hate their guts and throw your book in the fire or out the window. Wait, that could be just me....

If you don't care if they like them, no need to read further! I'm a writer that believes in both likable and unlikable characters. I've written characters who were hard to like and I enjoy those characters too. But your reader must at least respect them and care about their conflict(s) and obstacles, enough to read through the entire book. If you make your character too unlikable and difficult, readers will toss your book aside.

We're talking about the likable ones here, so the best formula, I believe, is this: for every subversion, meet an expectation. For balance.

If your reader is introduced to a character they like, they are more willing to follow her, even when she does something stupid, mean, or inexplicable (the explanation will hopefully come by the end of the book). So start off with reasons to like them, then feel free to jerk that rug out from under the reader at your earliest convenience.

In the workshop, we talked about our favorite heroines (in books and films) and made a list of qualities they possessed. Here is the list - but remember that you only need to pick a handful of these! Whatever will make your heroine appealing.

-solitary (even if in marriage, with kids, etc.)

-mature (can be learned in the story)

-talented (in large or small way)/physically adept at something

-doesn't need to be the center of attention

-must have capacity for change

-moves out of comfort zone

-has quirks (struggles with some - perhaps they make things worse?, proud of others - set her apart)

-examines emotions and actions (at some point), self-aware

Here are some exercises we did that yielded pretty fabulous results from everyone. I'm a tough critic and I found something admirable in everything I heard, and there were many different styles and genres among the dozen of us there. I've tweaked the exercises a little because one or two I found rather bland.

I'll tell you why you should write them after you give them a try.

1) Introduce the character as we would first come upon/see her. If this is too broad and difficult, write about some aspect of your heroine's routine. How she starts or ends her day. How she arranges flowers, writes a letter, organizes her desk, (gosh these sound so soft and girly - okay, how she cleans and arranges her knives, in case she's a serial killer. Better?).

2) Write a scene where you draw out one of the above characteristics in your heroine via an argument with another character. One where she has to defend herself - for example, defend a belief, an action, a possession, a goal, a desire.

3) Write about your heroine's room or an object that is important to her. She can be straightening the room, packing or unpacking a suitcase before or after a trip, figuring out where to hide this object in her room from someone (make sure we know why), or better still - have another character be snooping in her room. The object and room should highlight one or two of the characteristics in the list.

4) One of the big ones in the list is 'must have the capacity for change.' Without it there's no story. Write a scene where a character has changed and learned something - the crisis/climactic moment or the moment of realization. A scene of self-examination.

I wrote quite a few fine scenes that really surprised me from these exercises. I learned a couple of things about my character that I hadn't known before.

I highly recommend doing separate writing exercises on your character, especially if you write in a linear fashion as I do. I write each scene one after the other. Writing scenes out of order is too chaotic for me. But it also means that, in the first draft, my main character can become rather suffocated. I don't see, and therefore dig into, her cracks as much as I could because we are both looking straight ahead. And the cracks are where it's at.

By looking at her from different angles via exercises, I look at her obliquely, and make inspiring discoveries that can make her fuller and richer in the book itself. It's called 'averted gaze' and it's how one looks at the stars in order to get a sense of their shape and see how brilliantly they shine.

If you're a Jane Austen fan and want to read more about my trip, I'm sorting through my pictures now (I took 1400 total. Too many?) and will be posting soon. Check out my blog at http://www.embarkingonacourseofstudy.com/.

Christine Stewart is program director for literary arts with the Maryland State Arts Council. She writes, teaches, and edits in Baltimore. Check out her Facebook page at http://www.facebook.com/ChrisStewartTheRealWriter.